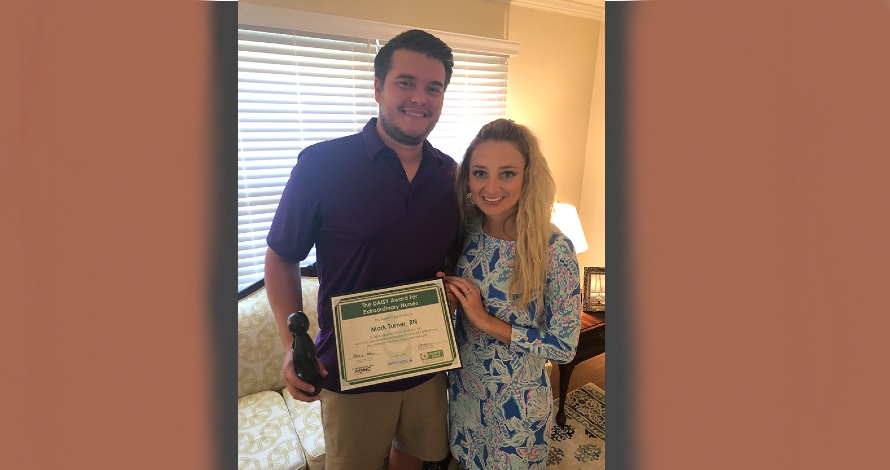 Top-notch clinical care. Quick action during emergencies. Warm smiles. Comforting reassurances. Nurses form the bedrock of support for patients and families during illness and hospitalizations, some of the most stressful life events.

Since the beginning of 2018, AMN Healthcare and The Center for the Advancement of Healthcare Professionals (The Center) have participated in the Daisy Award for Extraordinary Nurses, a worldwide awards program that recognizes nurses for the superhuman work they do for patients and families every day.

About the Daisy Award

The organization behind the Daisy Award is the Daisy Foundation founded by the Barnes family. Daisy stands for Diseases Attacking the Immune System. In 1999, Pat Barnes, loving son, husband, and father to 3-month-old daughter Riley, lost his life because of complications from Idiopathic Thrombocytopenic Purpura (ITP), a disorder that can lead to quick or excessive bruising and bleeding caused by unusually low levels of platelets, the cells that help blood clot.

During the eight weeks, he was hospitalized before his passing, Pat’s wife Tena, his dad Mark and other family members were deeply touched by the extraordinary care, kindness, and empathy shown by the nurses who cared for Pat. They could find no better way to honor his memory than creating a program to recognize nurses who go above and beyond to provide the best care and service to their patients.

Today, AMN is among the more than 2,700 healthcare organizations in the U.S. and in countries including China, Saudi Arabia, Vietnam, Thailand, and Brazil that participate in the Daisy award program.

And the Winners are ….

Our most recent Daisy Award winner is Mark Turner, an emergency room nurse with American Mobile, an AMN company. Mark was nominated for the award by his wife Kate, also a nurse, for his hard work, dedication, and kindness toward his patients. Here’s an excerpt from the letter she wrote to nominate Mark:

“I know how compassionate Mark is mostly from the patients who come up to the floor from the emergency room. He is just an amazing nurse, doing his job humbly and with love. The fact that Mark can make an impact on so many people in such a short time, not only as an ER nurse but also as a traveler, who is a short-term employee, everywhere we go, is awesome to me.”

You can learn more about Mark at https://bit.ly/2pVKlVM.

The first quarter winner was Liana Corey, a travel nurse with NurseChoice, an AMN company. Liana was nominated for her compassion, quick thinking, critical nursing knowledge, and empathy by the mother of a child that Liana cared for during his hospitalization. Read more about Liana at https://bit.ly/2CMfoMm.

Stay tuned for the results!