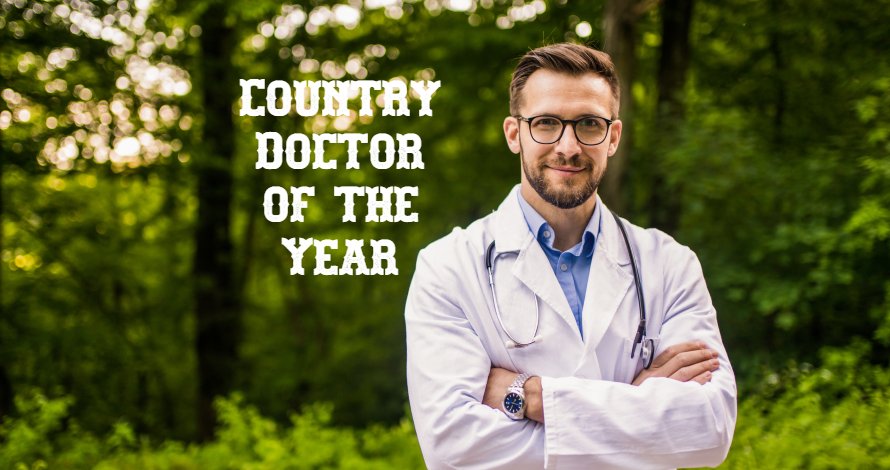 He is an internist/pediatrician, a pharmacist, a farmer and a deputy, and now Neil Nelson, M.D., of Gibson City, Illinois, is Staff Care’s 2012 Country Doctor of the Year.

First presented in 1992, the Country Doctor of the Year Award recognizes the spirit, skill, and dedication of America’s rural medical practitioners. The award is intended to shine a positive light on rural medical practice and to inspire younger physicians to practice in rural areas where they are desperately needed.

Dr. Neil Nelson poses with his antique physician's buggy, which he keeps on the family farm. In the buggy is Breanna Dalton, one of Dr. Nelson's patients and a family friend.

A true hometown hero, Dr. Nelson was born in Gibson Area Hospital, where he now admits patients. Raised on his family’s 320-acre farm in Gibson City, Dr. Nelson knew he wanted to be a physician from the time he worked at the switchboard of Gibson Area Hospital in high school. As a testimony to his dedication, he began his career in healthcare as a pharmacist so he would be familiar with the drugs that rural patients need. Trained as an internist/pediatrician, Dr. Nelson now sees patients of all ages, regardless of ability to pay.

Known for his superb diagnostic skills, Dr. Nelson’s practice includes 5,000 active patients in a town of only 3,500. He has drawn patients from 50 different zip codes and from as far away as 1,000 miles.  Dr. Nelson is on call for his patients 24 hours a day, seven days a week and has not taken a vacation in over 12 years. He continues to make house calls and in his “spare time” serves as a deputy, allowing local law enforcement to spend time with their families on holidays. Until recently, Dr. Nelson also was an active farmer.

As the 2012 Country Doctor of the Year, Dr. Nelson will be able to enjoy two weeks of time off, as Staff Care, an AMN Healthcare company, will provide a temporary physician to fill in for him at no charge.  He also will receive the award’s signature plaque featuring a country doctor making his rounds on a horse and buggy, an engraved stethoscope and a monogrammed lab coat. This image on the plaque is especially appropriate for this year’s winner, since he has the same style antique buggy on his own farm.

At Staff Care, we are especially proud to honor Dr. Nelson and other rural practitioners like him who give so much of themselves to their patients and communities throughout the year. Additional information about the Country Doctor of the Year Award--including how to nominate an outstanding rural physician for next year’s award--can be found at www.countrydoctoraward.com.