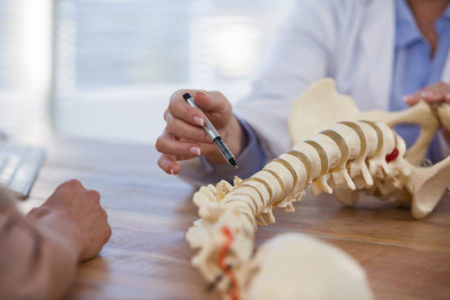 The patient was given 2 grams of cefazolin IV and taken back to the O.R. After induction with a general anesthetic, the patient was then placed in the right lateral decubitus position. An axillary roll was placed underneath the right side. The right arm was placed on an arm board. The left arm was placed on an airplane splint. SCDs were placed on the lower extremities and functioned throughout the case. Once he was well positioned, the pelvis was then taped down onto the table.

We then broke the table to the right-hand side to allow opening of the disk space. We taped down the legs. We then taped down the chest to hold it in place. The left flank was then prepped and draped in the usual sterile fashion. This was going to cover both the lateral and the posterior approach. We then began by marking out the location of the L3-L4 and L4-L5 disk spaces. The patient does have a persistent disk at S1-S2, so we made sure to count the levels properly. In this case, there was an existing laminectomy at the L4 level, so we used that as an assist in our landmarks. Once he was well positioned, we marked out the L3- L4 and L4-L5 disk spaces. We then made an incision directly between the two. The incision was carried through the skin and subcutaneous tissue. We then made a small counter-incision posteriorly.

We punctured into the retroperitoneal space and then used blunt dissection to sweep everything completely off of the iliopsoas and off of the left lateral wall. We then inserted the first dilator. Under direct guidance, we guided it down directly onto the iliopsoas. We docked it onto the L4-L5 disk space in the anterior third of the disk. We then advanced it down with the neuro-monitoring attachment and advanced it down into the L4-L5 disk space. We then gently dilated out. We checked to make sure it was in good position. We then inserted a size 13 lateral quadrant tube. We probed inside the quadrant to make sure there was no nerve within the field. We then fixed the retractor onto the L4 vertebral body. We used the knife to do an annulotomy on the disk at L4-L5. We then used the Cobb to puncture through to the right-hand side and released the annulus on the opposite side.

We then used the curettes to completely remove the disk at L4-L5. We began trialing, and it fit nicely for a size 12 cage. We selected a size 12 Clydesdale cage. We packed the inside with half of a sponge of InFUSE and some allograft bone and inserted it. We used a 12-degree lordotic cage. We then removed the retractors. There was no bleeding. We then repeated the same process at L3-L4, and again, we got a size 12 cage in at that level. We then removed all the retractors. We got final films, showing both cages in good position in the midline. We then closed the incisions with 2-0 Vicryl in the deep tissue, 2-0 in the subcutaneous tissue and 3-0 Biosyn in the skin. A sterile dressing was applied.

The patient was then flipped prone onto the Jackson table. His face was placed on a foam pillow with the eyes well protected. Arms were placed out on arm boards with the nerves well protected. Chest pads were placed in the middle of the sternum. Hip pads were placed over the ASIS. Knees were placed on gel pads. Feet were elevated up on pillows. SCDs were placed on the lower extremities and functioned throughout the case. Again, once he was positioned on the table, the back was prepped and draped in the usual sterile fashion. We had already taken a time-out for the lateral approach, so we continued on the posterior approach. We marked out his previous incision in the midline. The incision was carried through the skin and subcutaneous tissue. We incised the deep tissue and then identified the remnant of the spinous process of L3 and used this as a landmark. We dissected down and exposed out the L2-L3 facet joints, making sure to preserve the capsule as well as the L3 transverse processes. We then exposed out the facet joints at L3-L4 and L4-L5.

We dissected out, exposing out the transverse processes. Once everything was exposed out, we brought in the C-arm, verifying we were at the correct level. We then began placing pedicle screws. At L3, we placed them outside the L2-L3 facet joint in the midpoint of the TP. We drilled with the Midas Rex, used the gearshift with neuromonitoring attachment, probed, tapped, probed again and then filled it with a 6.5 mm pedicle screw. At L4 and L5, we used the midpoint of the TP and the midpoint of the superior facet as our starting point, and again, we got in 6.5 mm pedicle screws at those levels. Once the screws were all placed, we got x-rays showing they were all in good position. We then tested all the screws, and they were greater than 30 mA. We then inserted 70 mm rods on both sides, locked them down onto the screw heads, and then torqued and counter torqued them. We then got final x-rays showing all the screws were in good position. Alignment looked good.

We then removed the C-arm and brought in the microscope, which was used for the revision laminectomy. Using the Midas Rex and the rongeurs, we removed the inferior half of the remnant of the spinous process of L3. We then did a revision laminectomy using the Midas Rex. We removed the tissue. We then osteotomized the medial part of the facet joints at L3-L4 bilaterally to fully decompress the lateral recesses. This allowed us to develop a normal plane that we used to follow it down distally. The remnant of the lamina of L4 was very scarred down, so we used the curettes and gently peeled it off. We thinned it down with the Midas Rex and then removed it completely. We then osteotomized the L4-L5 facet joints to expose out the lateral recesses and again decompressed the lateral recess and made sure everything was well decompressed. It was extremely tight on the left-hand side, and we were able to get a good decompression on both levels.

We then checked, and there was no evidence of any dural leak. The central canal and lateral recesses were well decompressed. We then irrigated it out with 5 mL of 10% Betadine mixed in 150 mL of saline and followed this with 3 liters of normal saline irrigation. We then decorticated the transverse processes at L3, L4 and L5. We inserted the bone that had been removed along with the remaining allograft bone and placed it in the lateral gutters. We placed a Hemovac drain in the deep tissue. We then placed a cross-link across the spine to help prevent compression of the dura. We then closed the deep tissue with #1 Vicryl. Superficial tissue was closed with 2-0 Vicryl. The skin was then closed with 3-0 Biosyn in subcuticular fashion. Sterile dressings were applied. The patient was then flipped supine and transported to the recovery room in satisfactory condition.

What ICD-10 PCS codes are assigned for the fusion procedure?

This fusion was performed anteriorly with cages and posteriorly with allografts and autografts. Per PCS guideline B3.10b If multiple vertebral joints are fused, a separate procedure is coded for each vertebral joint that uses a different device and/or qualifier.

Per CC 3rd Q 2013 360-degree spinal fusion states,” two codes are required because the 360-degree fusion involves both a posterior column and an anterior column fusion and there are two different qualifiers to represent the procedure performed. Additionally, the fusion involved a bone graft, utilizing locally harvested autograft bone, some allogaft, and BMP. The ICD-10-PCS Official Guidelines for Coding and Reporting state, “If a mixture of autologous and nonautologous bone graft (with or without biological or synthetic extenders or binders) is used to render the joint immobile, code the procedure with the device value Autologous Tissue Substitute.”

Per nosology “interbody fusion device is to render the joint immobile and fuse degenerative disc spaces to provide an immediately stable segment for fusion and relief of symptoms. The device is used to restore degenerated disc space to or near its original height. The procedure involves removal of portions of the disc and vertebral bones to allow the insertion of fusion devices into the disc space.

Bone grafts may be packed inside the implant. Any autologous and/or nonautologous graft material (bone graft, morselized bone or demineralized bone matrix) used is included in the interbody fusion device.  Fixation instruments (ie Rods, plates, screw etc) are included in the fusion and not coded separately.