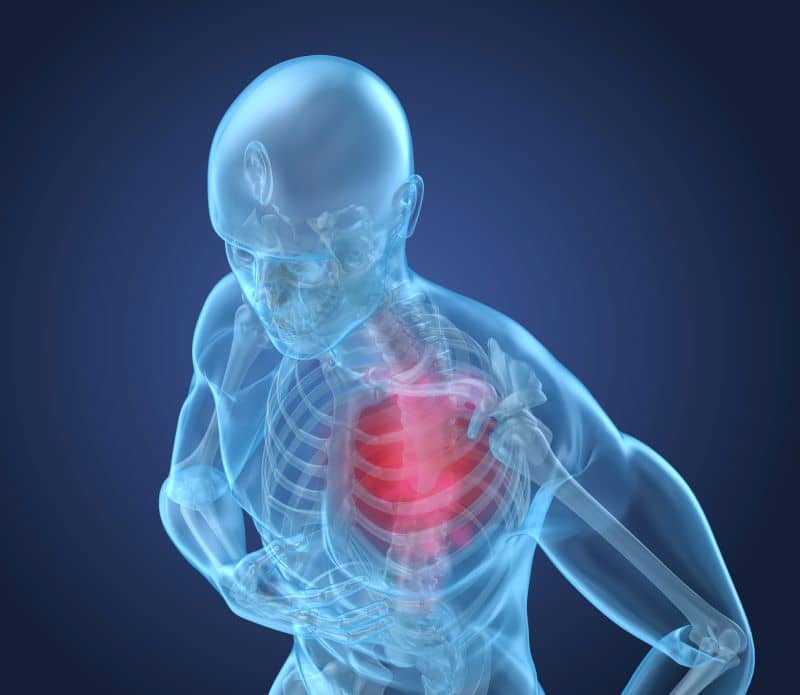 Studies have shown that myocardial injury, defined by an elevated cardiac troponin (cTn) value, is frequently encountered clinically and is associated with an adverse prognosis.  Although the myocardial injury is a prerequisite for the diagnosis of MI it is also an entity in and of itself.  To establish a diagnosis of MI, criteria in addition to abnormal biomarkers are required.  Non-ischaemic myocardial injury may arise secondary to cardiac conditions such as myocarditis or may be associated with non-cardiac conditions such as renal failure.

Therefore, for patients with increased cTn values, clinicians must distinguish whether patients have suffered a non-ischaemic myocardial injury or one of the MI subtypes. If there is no evidence to support the presence of myocardial ischemia, a diagnosis of myocardial injury should be made.  This diagnosis can be changed if the subsequent evaluation indicates criteria for MI.  The current Fourth Universal Definition of Myocardial Infarction Consensus Document reflects these considerations through adhering to the clinical approach of the definition of MI. (Fourth Universal Definition of Myocardial Infarction, 2018)

Even though a clinical diagnosis for an elevated cardiac troponin exists, this presents a significant CDI and coding challenge in ICD-10-CM.  To begin, following the FY 2019 classification in search of myocardial injury we find:

As we look up ‘Injury, heart’, it is noted they are all S26.- codes.  These are traumatic injury codes and include codes for contusions and lacerations, none of which describe a myocardial injury as defined in the 4th UDMI.

So, the question becomes, what is the appropriate code to be assigned?  The most important point to remember is that a code is not to be assigned if it doesn’t fit the scenario.  This is stated in Coding Clinic 3Q 2017, pp 24-25.  Even though the Coding Clinic is answering a question about emaciation and malnutrition, a significant point was designated in the answer, “…a basic rule of coding is that further research is done if the title of the code suggested by the Index does not identify the condition correctly.”   Obviously, no one would assign a traumatic heart injury code (or any code for that matter) without considering the clinical scenario. During code assignment, there is going to be natural validation of the code and if the clinical evidence shows no traumatic injury, an S26 code would not be assigned.

Knowing that a traumatic heart injury code is not appropriate, we would next look at the definition of myocardial injury and consider a code for elevated cardiac troponin.  Unfortunately, there is no specific code for an elevated cardiac troponin leaving us with the assignment of R74.8 Abnormal levels of other serum enzymes.  This makes coding sense because troponin (a protein) is a type of enzyme.  In fact, there is a ‘tip’ under code R74.8 that states, “Assign for documented abnormal or elevated troponin level when a definitive diagnosis has not been established.” However, even though we do have a definitive clinical diagnosis, we don’t have a codable diagnosis.

Following the guidance found in Coding Clinic 3Q 2017, equating myocardial injury, a definitive cardiac event to an abnormal lab value is not an appropriate code choice but until further advice in a Coding Clinic and/or code guidance is provided, this is what we have at this time.

Based on the excerpt from the 4th UDMI that begins this blog, myocardial injury and myocardial infarction are two separate clinical entities and not a substitute for each other.  Along with that same thought, caution needs to be emphasized regarding a Coding Clinic from 1992, 1Q, pp 9-10, Myocardial Injury without Myocardial Infarction, which leads us to assign a code for other acute and subacute forms of ischemic heart disease (I24.8 in ICD-10-CM).

Myocardial injury is not ischemic. This is clear in the 4th UDMI and therefore, the code title suggested by the index does not identify the condition correctly.  The clinical information published in 1Q 1992 is outdated and not clinically relevant with recent best practice medicine.  In addition, the 1Q 1992 Coding Clinic also provides clinical information and has repeatedly stated in various coding clinics, clinical information published in the coding clinics is not to be used as clinical criteria for code assignment.  Based on the information in 1Q 1992 and 3Q 2017 Coding Clinics, caution is to be practiced if considering assigning a cardiac ischemia code to the documentation of a myocardial injury.

There are a lot of concerns regarding code assignment of non-traumatic myocardial injury at this time. Therefore, until further guidance is published, it is recommended that each facility have a roundtable discussion and invite cardiologists, hospitalists, medical leadership, CDI, HIM, and quality to discuss and establish a policy and procedure surrounding code assignment of non-traumatic myocardial injury.

Wishing you success in CDI!