The long-predicted wave of retirements among Baby-Boomer nurses is already underway, new data suggests from the AMN Healthcare 2017 Survey of Registered Nurses. This news intensifies the growing crisis of healthcare workforce shortages, forewarned by recent projections from the US Bureau of Labor Statistics that there will be more than 600,000 job openings per year for healthcare practitioners and technical occupations over the next decade.

Nursing shortages are already being felt throughout the country, and they are expected to intensify as the retirement wave becomes a more significant factor. The retirement wave is combined with other macro trends, such as the rising demand for healthcare services from our aging general population, to create a perfect storm of steadily worsening clinical workforce shortages.

According to the AMN Healthcare 2017 Survey of Registered Nurses, the percentage of nurses planning to retire in less than a year has risen significantly – to 27% in 2017, which is up from 16% in 2015. At the same time, the percentage who say they will retire in four years or more declined. 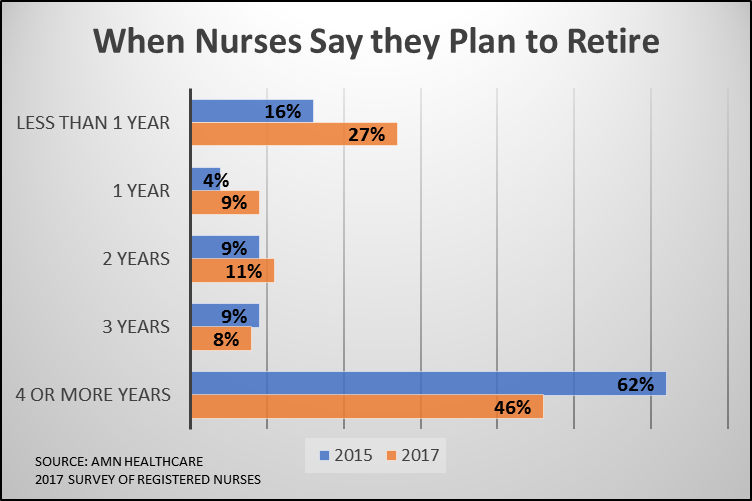 The number of Baby-Boomer RNs peaked at 1.26 million in 2008; since 2012, roughly 60,000 a year have exited the workforce and that number is climbing. By 2020, Baby-Boomer RNs will number about half their 2008 peak, according to recent research from the Center for Interdisciplinary Health Workforce Studies. The declining numbers of Baby-Boomer nurses confirm the retirement wave.

The AMN Healthcare research on nurse retirements closely follows the latest Bureau of Labor Statistics (BLS) Employment Projections for 2016-2026, which showed that the healthcare industry will soon become the nation’s largest employer. The BLS data revealed that job openings for healthcare practitioners and technical occupations will average 624,000 a year. For non-clinical healthcare support occupations, there will be another 635,000 job openings per year.

Nurse job openings will average 204,000 per year over the next decade, according to the BLS. 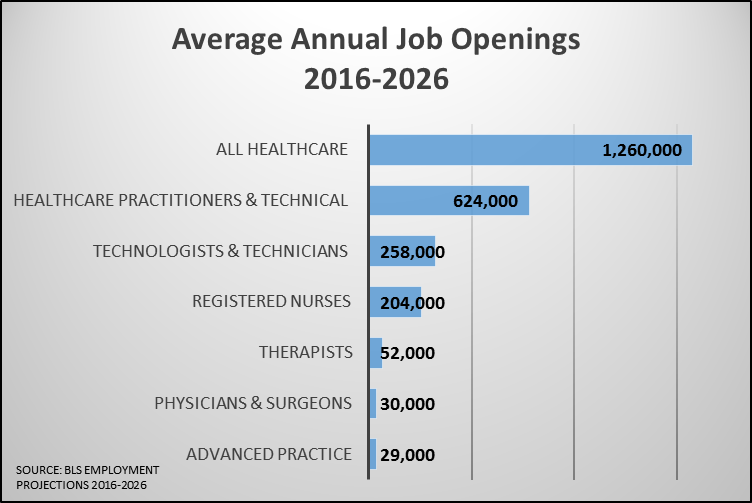 Comparative data from AMN Healthcare 2017 Survey of Registered Nurses also reflect a growing recognition from the front lines of healthcare that the nurse shortage is getting worse. The percentage of nurses who say shortages have worsened in the last five years grew from 37% in 2015 to 48% in 2017, while the percentage who said shortages have not worsened dropped from 34% in 2015 to 22% in 2017. Comments from survey respondents reflected their concern that nurse shortages can affect quality of patient care.

The retirement wave of Baby-Boomer nurses will create a particular drain on clinical expertise and institutional knowledge, which are critical to quality patient care and organizational success for healthcare providers. Our research, coming closely behind the BLS projecting an astonishing number of job openings for nurses, should be a wake-up call, because the healthcare industry will need solutions to cope with this impending crisis.