Regardless of the contentious debate over healthcare policy, powerful forces are shaping the healthcare industry with effects that go far beyond Washington politics. Demand for healthcare services has quietly shown robust growth, and this growth will continue into the future, driven by forces more powerful than legislation and executive orders. Rising demand for services translates into rising demand for healthcare workers – including nurses, physicians, allied health professionals, technologists and coders, leaders, and support personnel. Growth in healthcare employment will fluctuate, and there may be greater growth in explosive-demand sectors, such as home healthcare, but the long-range trend is upward. This should be a positive trend for any industry. However, the healthcare industry may not be prepared, due to workforce shortages. Increasing demand has been accompanied by a growing number of unfilled jobs, a serious challenge that can be perceived in the federal labor data and on the digital job boards of hospitals and health systems, where hundreds and even thousands of open jobs are posted. Both growth trends and growth challenges will continue into 2018 and beyond.

A powerful signal of rising demand for healthcare services and healthcare workers is how much money is projected to be spent on healthcare in the future. More than doubling from 2010 to 2026, when it reaches beyond $5.7 trillion, expenditures include payments for all healthcare costs, including pharmaceuticals, equipment and technology. However, labor constitutes the single greatest cost for most healthcare organizations. While the projected national health expenditures from the Centers for Medicare and Medicaid Services do not specify spending on the healthcare workforce, they do include forecast models based on trends of medical services consumed and payment for those services. Expenditures will rise for many reasons, but growing demand for the services of healthcare workers is a very significant reason. 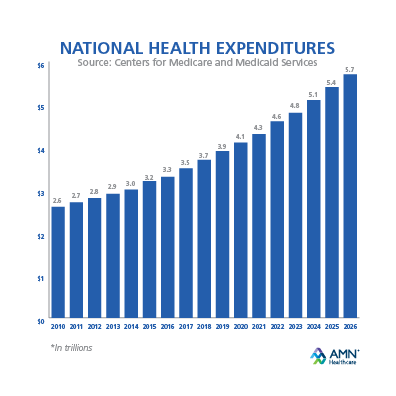 Healthcare Employment has been Booming

Healthcare employment growth has been thriving since the end of the recession. The US Bureau of Labor Statistics Current Employment Statistics has shown month after month growth in healthcare employment since 2013, when there were only small declines in three separate months, with the rest of the year showing monthly increases. After that year, healthcare job growth has been robust, reaching a single-month growth record of more than 45,000 new jobs filled. Even in 2017, despite the continued debate over the future of healthcare policy, the healthcare industry has added an average of 24,000 jobs each month. That’s vigorous growth in any industry. While healthcare job growth will ebb and flow in the future, the trajectory of growth has been consistently upward, even through the worst economic recession since the Great Depression. Employment growth is expected to continue for the foreseeable future. 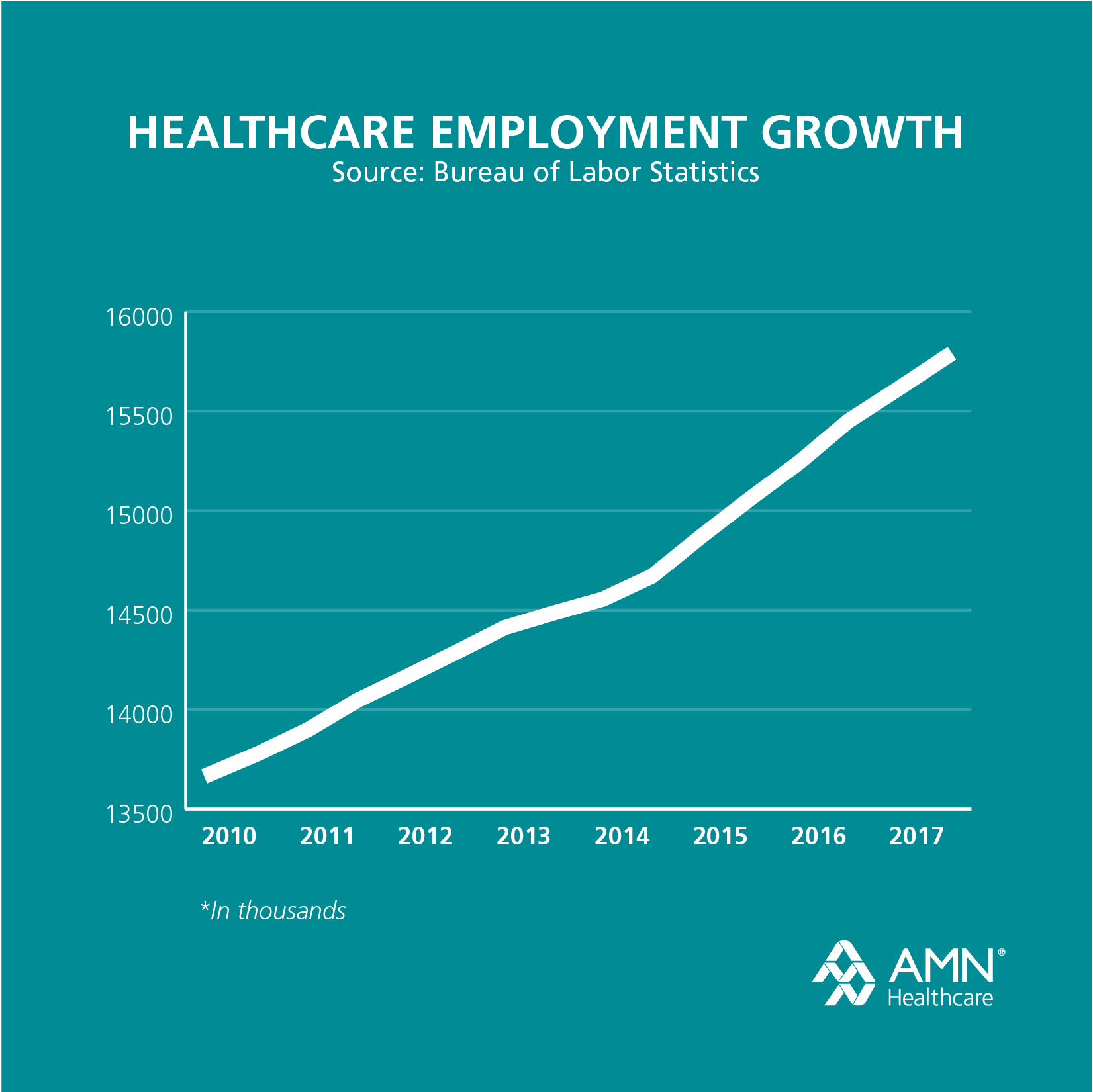 Another strong indicator of high demand for healthcare comes from the BLS Job Openings and Labor Turnover Survey (JOLTS). While job openings have traditionally outpaced job hires in healthcare, the gap between openings and hires has been widening rapidly since 2014. Job openings have been rising while job hires have remained relatively static. It was believed by many that the rise in job openings was due to the implementation of the Affordable Care Act in 2014. While it was a factor, it’s becoming more apparent that the confluence of other demand factors is also widening the gap of unfilled jobs – aging of the population, retirement of Baby Boomer healthcare practitioners, and the improving economy. This swelling gap – which represents a cumulative number of unfilled jobs – shows the challenges that healthcare providers face in finding enough practitioners and support personnel to fill today’s job openings. Other data reveals that the problem of high demand for healthcare workers, and low supply of those workers, may continue well into the future. 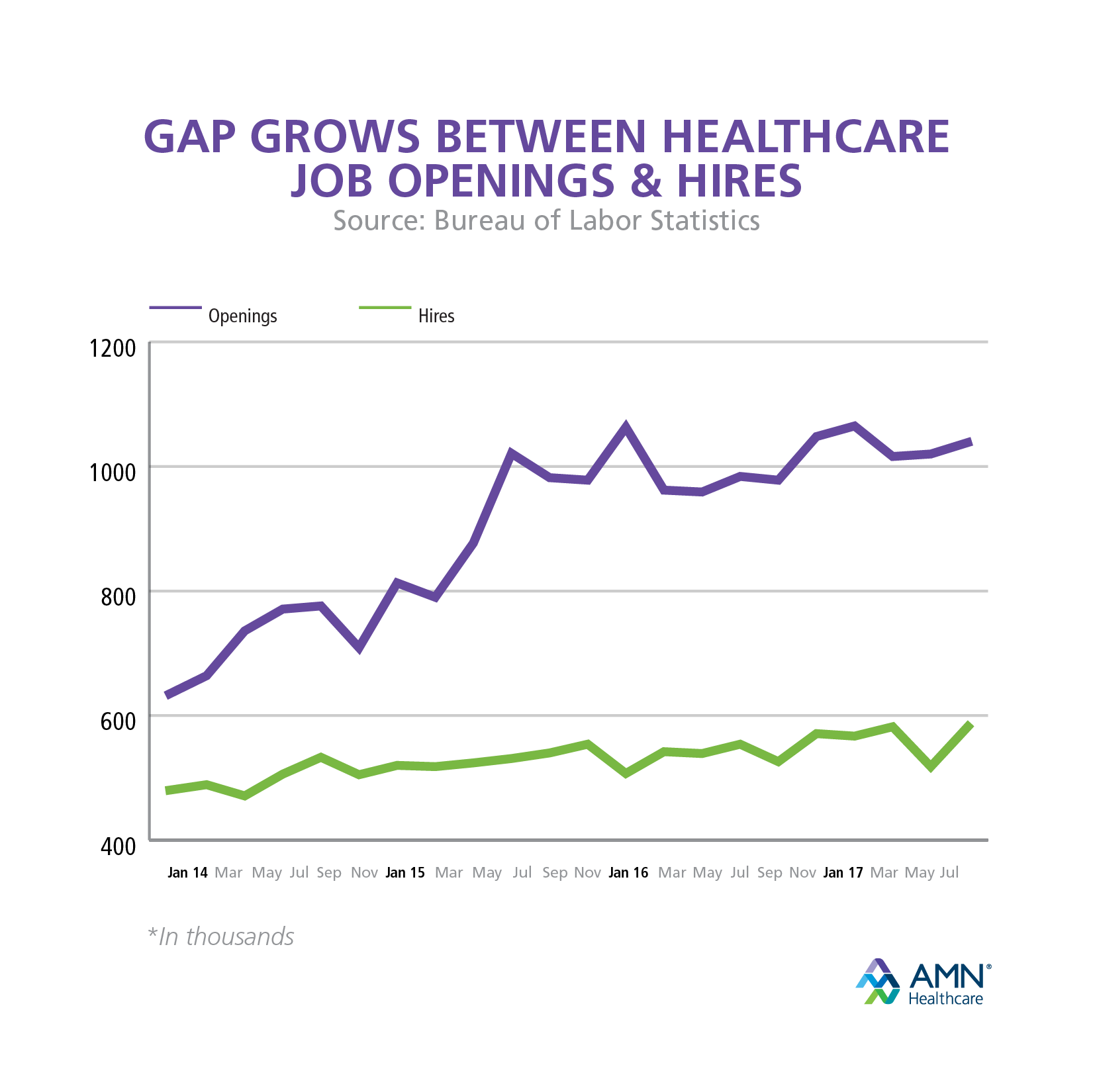 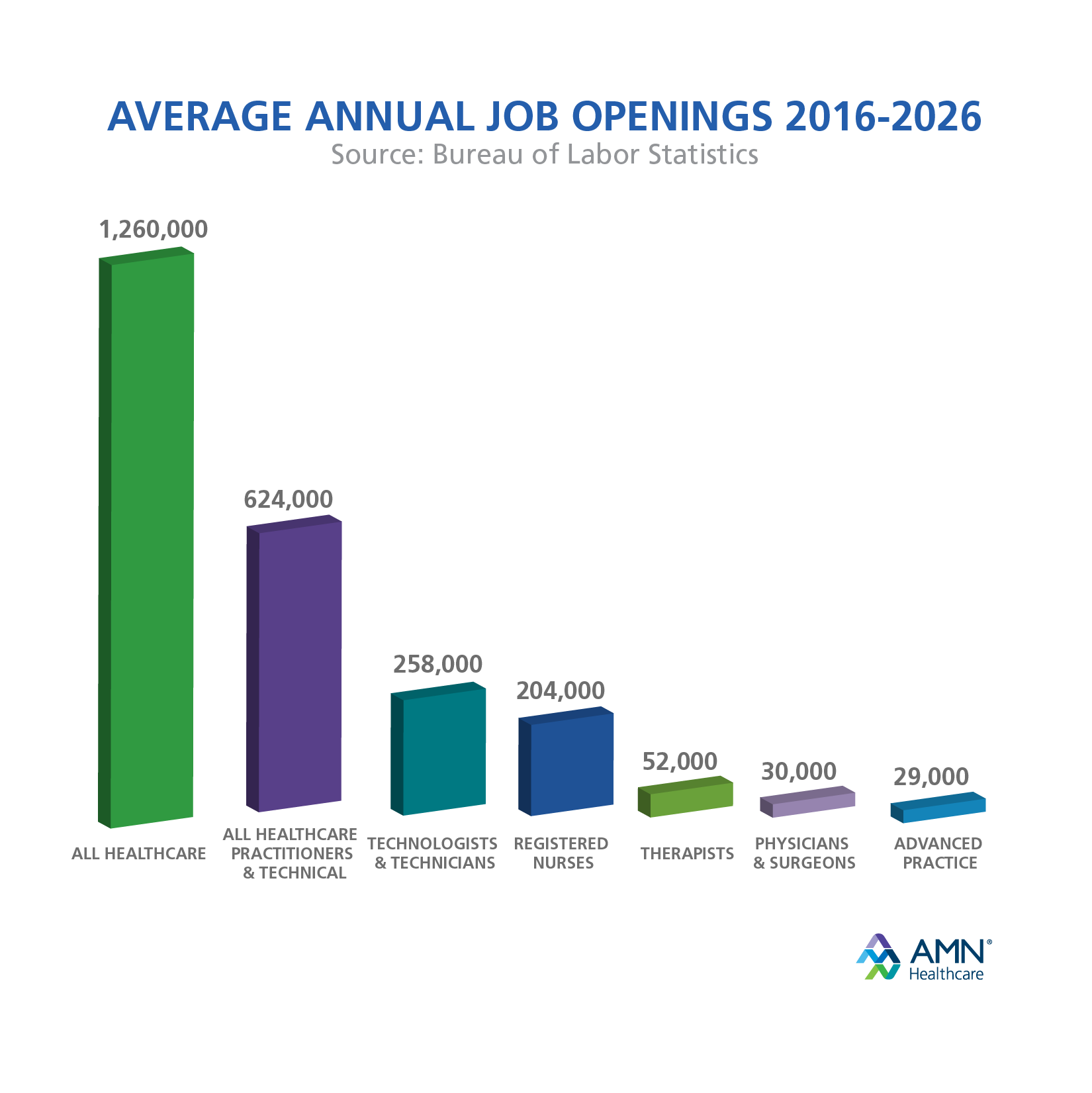 The greatest driver of demand for healthcare services and workers is the aging of the US population. According to projections from the US Census Bureau, the number of people over 65 will grow from 43 million in 2012 to 84 million in 2050, rising from 14% of the population to 21%, as the nation’s overall population also grows. Older people need both a greater quantity and a greater complexity of healthcare services – both translate into more healthcare workers needed. People over age 65 experience three times as many hospital days compared to the general population; people over 75 experience four times as many. More than two of three older Americans have multiple chronic conditions, requiring complex care delivery. This growing older population is Medicare eligible, so the rising need for services will be covered, a factor that increases healthcare utilization. In addition, older people, particularly those over 75, are more likely to utilize skilled nursing and assisted living services compared to the general population, which also will increase demand for healthcare workers. 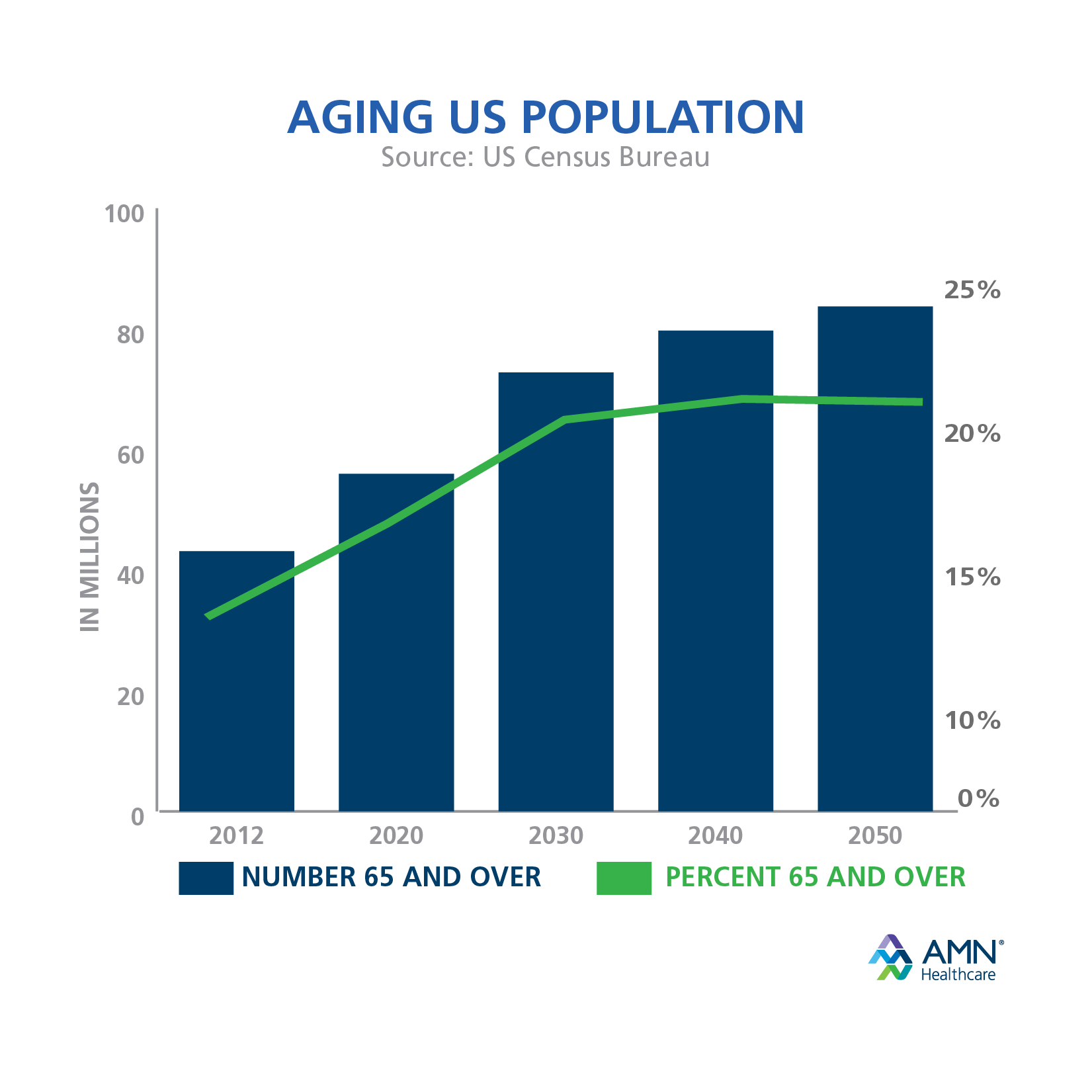 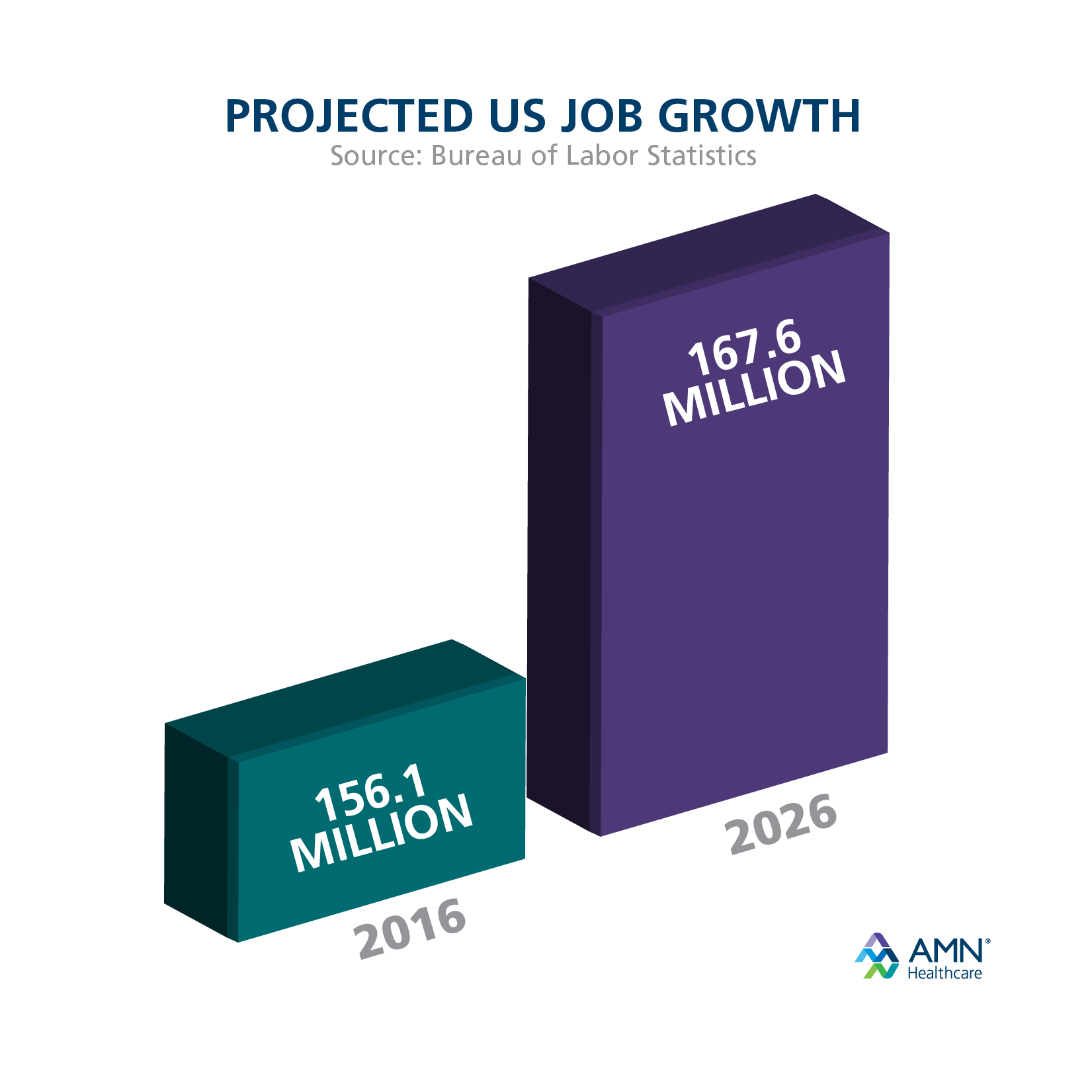 Demand for healthcare workers will be heightened by the wave of retirements among Baby-Boomer healthcare practitioners. Evidence from the recent AMN Healthcare 2017 Survey of Registered Nurses suggests that this wave already has begun among nurses. Retirement decisions will have the greatest impact on future supply of physicians, since more than one-third of today’s active physicians turn 65 within the next ten years, according to a 2017 report by the American Association of Medical Colleges (AAMC). AAMC estimates that there could be a shortage of more than 100,000 physicians through 2030. Shortages in the physical therapy workforce also have been projected. The retirement wave not only exacerbates the shortage of practitioners but also threatens the loss of experienced and specialty healthcare practitioners. For example, a new graduate nurse cannot replace a veteran nurse with decades of institutional and professional knowledge along with years of specialty training and practice. The retirement wave creates a growing number of hard-to-fill vacancies in the healthcare workforce. 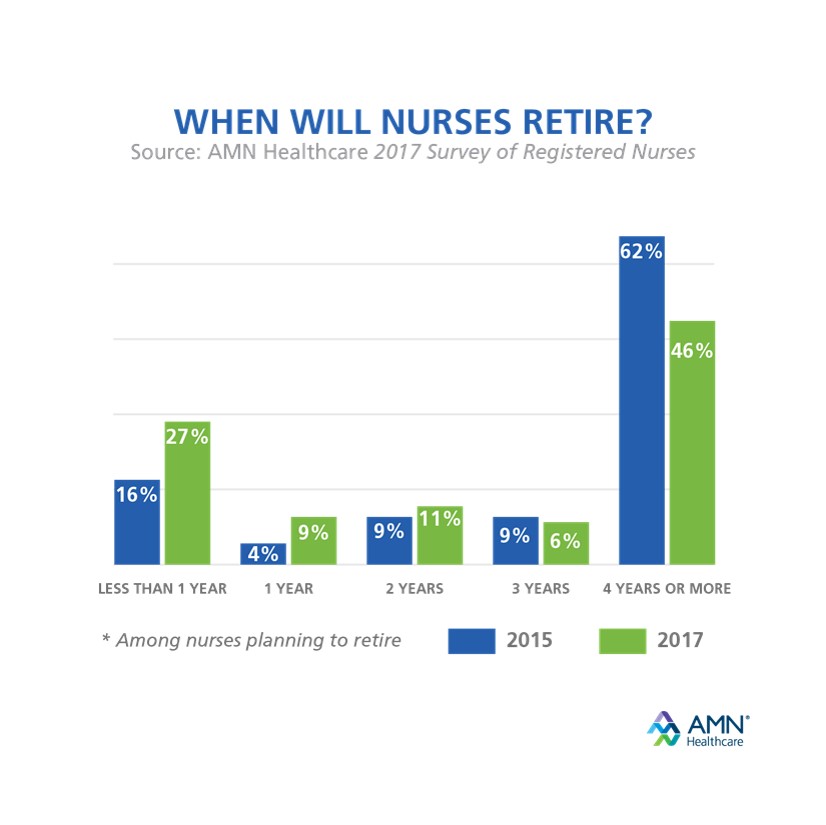 Robust demand is a positive trend for any industry prepared to meet that demand. In the healthcare industry, the low supply of healthcare workers is quickly becoming the biggest challenge to meeting patient care demand. This challenge is exacerbated by other important issues, such as changing reimbursement formulas, increasing competition, complex regulatory mandates, technology demands, and uncertain and disparate public policies. While healthcare employment growth will ebb and flow, and various sectors of the industry will see separate employment fluctuations, the trend in 2018 and the next decade will be growth in demand for healthcare services and healthcare workers. Since healthcare providers are by necessity and mission focused on quality patient care above all else, they will need new strategies and expertise to cope with future workforce shortages and fluctuations, and the systemic problems caused by these changes.