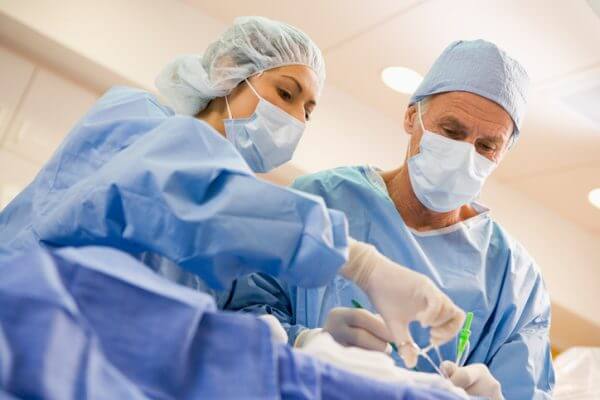 Small lateral thoracotomy was performed through the sixth intercostal space on the right, exposing the apex. The left femoral artery and vein were approached with microneedle, and Platinum Plus wires were left in place for the possible establishment of cardiopulmonary bypass. The left femoral artery was then approached with a microneedle, and a 6-French radial sheath was placed, through a pigtail catheter was placed into the right coronary sinus and aortography was performed for proper valve alignment. Under rapid ventricular pacing, 2 mattress sutures of 2-0 Prolene were placed with pledgets. The patient was fully heparinized, and the apex was then punctured with a Cook needle.

A mild paravalvular leak was noted, and therefore, the valve was re-ballooned with an extra milliliter of saline. This ameliorated the paravalvular leak issue. The delivery device was then placed again across the valve. The wire was retrieved. The delivery device was then removed from the sheath, and under rapid ventricular pacing, the sheath was removed from the patient. The thoracotomy was then closed in anatomic layers with Vicryl in the subcutaneous tissue and Dermabond on the skin. Blake drain was used for intercostal drainage. Exparel was used for analgesia. The patient was returned to cardiothoracic intensive care unit.

What ICD-10 PCS code is assigned for the valve replacement?

The coding handbook states “Endovascular and transapical replacement of aortic valve is a catheter-based procedure that allows for implantation of a prosthetic valve within the diseased native valve without invasive surgery or cardiopulmonary bypass. A bioprosthetic valve is delivered by catheter across the diseased native valve through the femoral artery or vein (endovascular approach) or through the apex of the heart by means of a thoracotomy incision (transapical approach). In both approaches, a balloon valvuloplasty catheter is advanced through the aorta and placed over the diseased native aortic valve. A balloon valvuloplasty is then performed. The delivery catheter is placed over the native valve, and the new bioprosthetic valve is put in place, destroying the native valve underneath it. Endovascular or transapical replacement of the aortic valve is coded to the root operation “Replacement.”

The Third character is Replacement “R”

Replacement Definition: Putting in or on biological or synthetic material that physically takes the place and or function of all or a portion of a body part

Objective: Putting in device that replaces a body part

What is the Root operation? Replacement
What did we replace? Aortic valve
What was the Approach? Percutaneous since it was done by transcather
What type of valve was used? Sapien XT
What type of valve is this? Zooplastic tissue
What is the qualifier? Transapical
The balloon valvuloplasty is inherent to the procedure and not coded separately.

Coding Clinic, Third Quarter 2013 Pages: 26-27 Effective with discharges: September 10, 2013
TAVR is a minimally invasive transcatheter valve replacement for patients with aortic stenosis. Occasionally, the surgeon may perform additional testing, such as cardiac catheterization. If this test is performed for diagnostic purposes or further evaluation, the cardiac catheterization may be coded and reported, since it is not inherent to TAVR. However, sampling or monitoring of intracardiac pressures is inherent to the procedure and would not be coded separately.