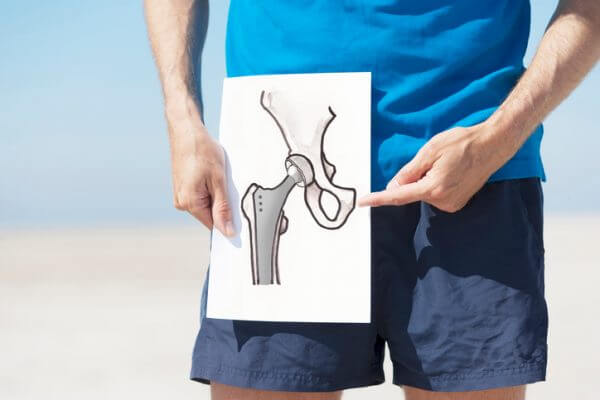 After adequate regional anesthesia was obtained 2gm of cefazolin and 1 gram of vancomycin were administered for intraoperative antibiotic prophylaxis. A Foley catheter was inserted under sterile conditions. The patient was then transitioned to the lateral decubitus position with the right hip up. Pelvic stabilizers were used to maintain the pelvis to the table. Once deemed appropriate, a posterolateral approach to the right hip was performed. The deep fascia was incised in line with the skin incision.

The gluteus medius was retracted anteriorly. The joint was exposed by sub-periosteal dissection such that the posterior capsule and short external rotators were retracted posteriorly as a single flap. A small, clear effusion was released. The hip was dislocated, the femoral head and acetabulum were inspected and showed severe degenerative arthritis. Neck length and offset measurements were taken. The femoral neck was then resected approximately 10 mm from the lesser trochanter. We then began preparation of the femur. The piriformis fossa was cleared and the remaining femoral neck was removed with a box osteotome.

This was followed by canal finder, lateralizing reamer and then sequential broaching to a size 16. The femoral anteversion was noted to be roughly 15 degrees. The femur was then retracted anteriorly and a posterior Taylor retractor was placed. The acetabulum was thus exposed. Peripheral osteophytes were removed. The non-ossified labrum was excised. Central osteophytes were removed as well as the central pulvinar to reveal the inner table. Sequential reaming was performed up to a size 59 mm outer diameter. A 60 mm cup was impacted in approximately 45 degrees of abduction and 25 degrees of anteversion.

The joint was thoroughly irrigated. The posterior capsule was re-approximated proximally to the gluteus medius tendon insertion with #5 Ethibond suture. It was closed in the mid-section through drill holes in the greater trochanter. The deep fascia was closed with interrupted 0 Vicryl and #1 Vicryl running suture. The subcutaneous tissues closed with interrupted 2-0 Vicryl suture. The skin was closed with a 3-0 Monocryl suture and reinforced with steristrips. The wound was then infiltrated with 30 cc 0.25% Marcaine with Epinephrine. A 10″ Aquacel dressing was then applied. Sponge and needle count was performed and was correct x2.

What PCS code would be assigned?

When you are starting to code a hip replacement you need to know what type of components are used. After looking up the components in the above case the patient had a ceramic head with a poly femur and liner. The final closure was done with drill holes so this would be uncemented.

The 7th character qualifier for hip and knee arthroplasties describes whether the prosthesis is cemented or uncemented. A cemented joint replacement attaches the joint to the bone with epoxy cement. An uncemented joint prosthesis has a mesh of holes on its surface that allows the growth of the patient’s natural bone to hold the device in place.

As stated in Section A11 of the ICD-10-PCS guidelines, “Many of the terms used to construct PCS codes are defined within the system. It is the coder’s responsibility to determine what the documentation in the medical record equates to in the PCS definitions. The physician is not expected to use the terms used in PCS code descriptions, nor is the coder required to query the physician when the correlation between the documentation and the defined PCS terms is clear.”