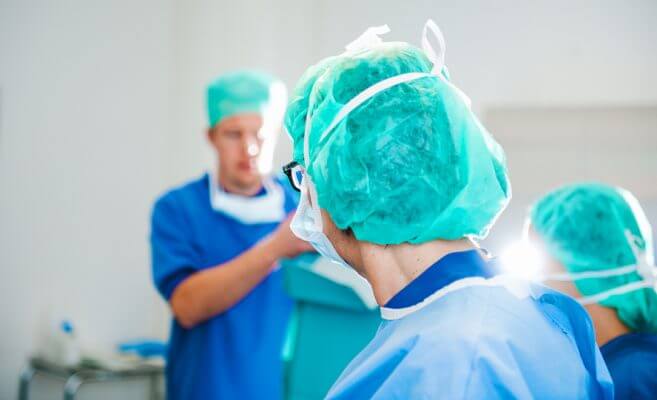 With the patient in the supine position under general anesthesia, the abdomen was sterilely prepped and draped in the usual fashion. A transverse incision was made about 18 cm from the xiphoid just to the left of the midline, 12 mm in length. A Visiport was used to pass a 12 mm port and insufflate with CO2. Five mm ports were placed in the subxiphoid, in the left anterior axillary subcostal area and on the right anterior axillary subcostal area, and perhaps 3-4 cm below the line between the midline and the right upper quadrant 5 mm port.

I placed a 15 mm port and with these ports in place, I was able to first identify the cecum and run the small bowel to 300 cm from the ileocecal valve, and there I placed 2 endoclips distally and 1 proximally. Then I lifted it up to the area of the duodenum and when I could document that it was going to reach, I proceeded to drop it and place a liver retractor and dissect out the duodenum and 4 cm distal to the pylorus.

I secured the anastomosis with a running 3-0 Vicryl and an outer layer of a running 2-0 Vicryl was then added. We closed the Peterson space with this ileum with a running 2-0 Ethibond. We completed the procedure with the sleeve and 6 cm from the pylorus on the greater curvature, we began a dissection and transection of all of the blood vessels on the greater curvature up to the GE junction. I then utilized the Endo-GIA black staple for the antrum after having the 34-French EZ tube placed by the anesthesiologist passed to the pylorus and using that as a rough gauge, we transected the stomach rather loosely to the edge of the EZ tube. I then used a purple staple and then finally tan staples until we were done.

We removed the stomach through an EndoCatch tube bag through the right upper quadrant 15 mm port, which was then closed with an inlet of 0 Vicryl suture. The area was irrigated and lavaged as was the duodenal area and the EZ tube was withdrawn and the CO2 was allowed to escape. The wounds were then lavaged and closed with staples. The patient tolerated the procedure fairly well.

Per coding clinic 2Q 2016 page 31 “Laparoscopic biliopancreatic diversion with duodenal switch” This surgery has two parts. In the first part, the volume of the stomach is reduced by dividing it vertically and removing approximately 85%. The stomach and pyloric nerves are still intact and the stomach is functional. The remaining stomach is banana-shaped and has less capacity. In the second part, the digestive juices, and bile and pancreatic juice are re-routed (bypassed) from the duodenum to the ileum, minimizing calorie absorption. Assign the following ICD-10-PCS codes:

They remove or excise all but a sleeve portion of the stomach. Then they transect a portion of the duodenum and form an anastomosis to the ileum creating a duodeno-ileum bypass.